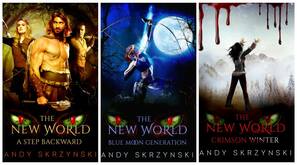 WARNING: This section is full of SPOILERS to the important mystery and intrigue within the story!
﻿PLEASE! ONLY EXPERIENCED AND SERIOUS INQUIRIES!
I will consider all legitimate offers from proven screenwriters, movie producers and directors. If you are experienced in producing high-quality movies with state-of-the-art graphics to create life-like monsters and are genuinely interested in discussing a contract for a potential movies series of The New World trilogy, by Andy Skrzynski, please CLICK the "SUBMIT MOVIE INQUIRY" button below to take you to my contact page for submission. If you'd like to learn more about this science fiction action-adventure, please read the case for a movie series below.
Submit Movie Inquiry
﻿The Story!
Following Earth's transformation after the World Annihilation Period, the Ukes find several varieties of unearthly creatures lurking in the shadows and killing their fellow villagers. A trio of life-long friends and their mentor discover the leader of the detested Skalags has gone wild, genetically altering animals, insects, and plants to clone and carry out his acts of revenge. Infuriated and determined to protect their neighbors, Thoruk, Mercy, and Storm vow to put an end to Zolokt and his vicious monsters.
﻿Why The New World Book Series is a worthy candidate for an exciting blockbuster Movie Series!
The New World book series has all the major attributes to attract a broad base of movie goers and tantalize them with an abundance of suspense, action, unique monsters, interesting characters, humor, and even a touch of romance. The unique tale and premise of the trilogy appeals to young and old alike and is looked upon very favorably. Better yet, even though the series currently spans only three books over the period of 2075 through 2105, the material within the tale can easily be expanded in all directions to provide the events leading up to and following the current trilogy. Below, I explain these important points in more detail. One thing is certain! With all the monsters, battles and associated horror they unleash, this series would be even more thrilling as a movie!
﻿BROAD APPEAL AND WELL LIKED:
Though my initial target audience for The New World: A Step Backward (Book 1) was teens and young adults, it didn't take long to recognize the story attracted interest from a much larger audience. After my initial query for Beta Readers to scour the manuscript during development, 16 volunteered within the first day. All-in-all, 64 Beta Readers signed up within the following months as word quickly spread. Men, women, and children, spanning 12 years old to over the age of 60, poured through the draft pages and regularly provided feedback.

The trilogy has ranked highly across a vast range of genres reaching Amazon's Best Sellers Ranking for Kindle eBooks over the past 4 years as follows: #1 Post-Apocalyptic, #1 Genetic Engineering, #2 Science Fiction, #2 Thriller, #4 Action/Adventure, #6 Paranormal, #15 Teen/Young Adult, and in the Top 100 for Overall Kindle eBooks at #61. In addition to the wide range of ages, readers of varying interests find the story within the pages of the trilogy very compelling!

In the short time since the trilogy has been completed, the book series has garnered 96 ratings across highly respected Amazon (37) and Goodreads (59) that average a solid 4 Stars (3.93) overall. Each individual book is rated as follows: 3.8 for Book 1, A Step Backward; 4.1 for Book 2, Blue Moon Generation; and 4.4 for Book 3, Crimson Winter. Each has progressively attained a higher rating. I've tracked over 22,000 purchases and downloads of Paperbacks and Kindle eBooks over more than 15 countries with very limited marketing resources. Fans of science fiction action-adventure will love the heart-pounding suspense and fast-paced action of a movies series based on the trilogy even more!!!

For some examples of the broad appeal, CLICK the "FAVORITE TESTIMONIALS" button below.
Favorite Testimonials
﻿ACTION-FILLED:
Since the primary audience for the first book started out targeting the younger generations, continuous action and suspense were of high priority throughout the book! Even when it became clear with Beta Readers that a much broader age group would love the tale, it was the fast-paced action and interaction between interesting characters and pets that made it so attractive! A continuous onslaught of never-ending muclones, threats from the Skalags, and an unrelenting sense that something was about to happen is always on the readers' minds. The desire to continually thrill the readers by leaving hooks throughout every chapter was included in the development of all three books of the trilogy.
﻿MUCLONES EVERYWHERE:
Want to keep your movie goers terrified and at the edge of their seats? How about dozens of unique creatures lurking in the forests, lakes, and countryside springing upon their prey when least expected? This gripping series is filled with such bloodthirsty beasts!

Zolokt, the leader of the Skalags, and eventually his children modify DNA structures of animals, insects, and plants while combining them to concoct 36 different vicious monsters. Most are from a twisted amalgamation of species most feared by humans doing things people dread with a passion. Beasts like gigantic mosquito-wasps who plunge their massive stingers into their victim's spine to paralyze them so they can pry the helpless prey's eyelids open with their long, spindly legs. Once positioned, the winged monster drives the mosquito's sharp proboscis through the eyeball to deposit larvae within the brain cavity. The end result of these ravenous wigglers feasting inside the cranium proves quite gruesome!

Check out all the different muclones found throughout the series, by CLICKING the "MUCLONES" button below.
Muclones
﻿INTERESTING CHARACTERS:
This heart-pounding tale benefits from numerous intriguing characters with whom the throngs of movie goers will certainly fall in love, including the following.
﻿HUMOROUS:
A premium has been placed on sprinkling humor throughout the challenging world faced by our favorite heroes so as to maintain a positive outlook when dealing with never-ending threats! From the banter of the original trio of beloved friends, through their children and their Texas allies, all the way up to the introduction of the oft-obnoxious but hilarious androids. Speaking of our advanced robotic friends, R2D2, 3CPO, and even the more complicated humanoids such as the Terminator have nothing over the wonderful AI characters of this series! Why in the world should androids possess limited emotional function way out in the future? Andralec, Havoc, and Bertha are every bit as emotional, and then some, as their human creators and teachers. Look at the tremendous technological advancements in our world over the past 75 years. With already existent progress in android and robotic development, it takes only a tiny imagination to conceive how complex such devices' emotions can be over the next 85 years in 2105! There's absolutely no reason at all that androids at the turn of the next century can't be as zany, corny, intelligent, funny, sensitive, and thoughtful as their human counterparts — maybe even more so!
﻿TOUCH OF ROMANCE:
While the series is filled with courage, fear, suspense, hatred, and battles, what decent story would be without a bit of romantic undertones? From the flirtatious teasing among the original heroes of the first book, continuing in Book 2 with glowing embers developing between the young daughter of Ukkiville's ruler, Thoruk, and the son of the Skalag's leader, Angrokt, all the way through to the blossoming relationships of the final book — love, with its occasional twists and turns, is in the air! Of course, the androids are not to be outdone, as even our robotic companions demonstrate that a deep emotional attraction is not merely limited to humans.
﻿EXPANDABLE:
The series could easily be expanded before, in between, and beyond the current three-book settings of 2075, 2093, and 2105! Here are a few examples of additional stories that could be written to propel more seasons and episodes for increased demand:
﻿WILL YOUR MOVIE PRODUCTION TEAM BE THE ONE?
With a growing readership of a wide range of ages and interests across many genres demonstrating they find the adventures of The New World trilogy compelling and exciting, the fan-base would be even more thrilled with a movie series exploiting the latest technology of graphical creations based on this well-liked trilogy! A real-life depiction of this New World to come with all its colorful representations of fierce monsters prowling and preying on victims will leave movie goers in awe and talking about the series for months, hopefully years after sitting on the edge of their seats through the intense and mesmerizing action, character development, and courageous struggles!!! This is one compelling tale a Movie Production Team should not ignore! Will you be the one to capture the box office winnings that will certainly follow? Don't miss out!!!
﻿PLEASE! ONLY EXPERIENCED AND SERIOUS INQUIRIES!
I will consider all legitimate offers from proven screenwriters, movie producers and directors. If you are experienced in producing high-quality movies with state-of-the-art graphics to create life-like monsters and are genuinely interested in discussing a contract for a potential movies series of The New World trilogy, by Andy Skrzynski, please CLICK the "SUBMIT MOVIE INQUIRY" button below to take you to my contact page for submission.
Submit Movie Inquiry