﻿﻿If heart-pounding, white-knuckle suspense is what you seek, dive into this gripping, action-packed adventure of Earth's inhabitants struggling to survive after the turn of the next century. Join Hoot and her other friends of the courageous Blue Moon Generation during 2105 in their fight to save their village and way of life from creatures more vicious than ever before.
Buy Kindle Version at Amazon
Buy Paperback Version at Amazon
Want a greater glimpse into the adventures of Crimson Winter?
​Read the first six chapters by clicking the "Look inside" of the Cover on the Amazon page:
Preview First Six Chapters
Table of Contents
Excerpts

​﻿Written for teens and young adults, but an adventure treasured by all ages young of heart!
Join over 20,000 readers across more than 13 countries enjoying the adventures of Thoruk, Caru, and Hoot!
Countries: U.S., Canada, Mexico, Brazil, U.K., Germany, Italy, France, Spain, Netherlands, Australia, India, and Japan.
Add to the list of readers in your country above or be the first in a country not shown.
As recently as February, 2019,
The New World: Crimson Winter
reached its highest
Amazon's Best Sellers Rankings
​for Kindle eBooks:
#1 Genetic Engineering
#3 Science Fiction
#6 Paranormal
#12 Action/Adventure
#15 Teen/Young Adult
#16 Suspense
Don't miss out on this very affordable, fast-paced novel.
​

There are 11 RATINGS across the reliable sources of
Amazon (5) and Goodreads (6) for
The New World: Crimson Winter
that average 4.5 STARS overall.
(Data current as of Mar. 15, 2019) 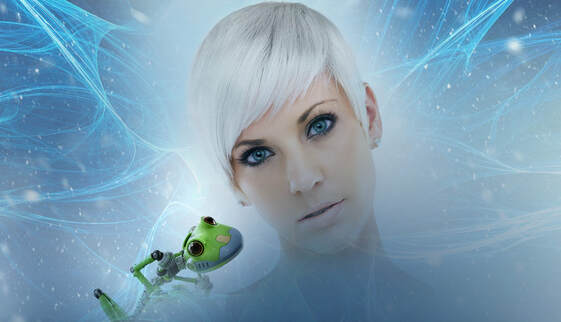 You'll love the precocious, often-obnoxious android, Andralec, and her pet frog, Croaker!
Together, they create a formidable pair to help fend off vicious beasts threatening the Ukes who Andralec is charged to protect!
Audiobook Targeted for Availability Later in 2019 !

'Forget the head games. Let's find that monster.'
Texas author Andy Skrzynski shares he spent his early years in an orphanage Jackson, Michigan, and moved on to graduate with a bachelor's in Electrical Engineering from Michigan State University. He worked at IBM in Austin, Texas until his retirement and now spends his days writing science fiction novels. His series The NEW WORLD has three volumes to date - CRIMSON WINTER is the third volume. Andy sets the mood for his ongoing adventure with richly colorful and imaginative covers that afford a sense of reality to these science fiction adventures that offer the life-and-death struggles on Earth after an apocalyptic period between 2019 and 2025. The language that flavors this exciting novel is set from the opening lines: 'October 17, 2105 - Twelve Years After the Second Battle with the Skalags - Stone-cold, every bone in Bartuk's body trembled. His sullen gaze slowly panned the crimson soil of his pasture, splattered with blood and raw flesh. The putrid stench of death invaded his nostrils and roiled his gut. He gagged once, then again, before puke exploded from his nose and mouth...' Welcome to the continued saga of THE NEW WORLD! At times reading the latest volume of a series without having the background of the earlier episodes can be disconcerting, but Andy's manner of writing brings us up to date and signals the desire to return to the earlier volumes... Becoming immersed in Andy's world is a fine adventure for the reader. Suspend belief and ride the waves of this talented science fiction writer.
-- Grady Harp, an Amazon "Top Contributor: Children's Books -- Hall of Fame -- Top 50 Reviewer" (5 Stars)

SUSPENSEFUL
I was at the edge of my seat reading as fast as I could to see what was going to happen next. Like all things, it's the finally book. I wish he would go on. I would LOVE to see all 3 books turned in to movies! I would be 1st in line.
-- V. Kraemer (5 Stars)

AWESOME BOOK
The New World: Crimson Winter (The New World, #3) by Andy Skrzynski is a great addition to this series, and certainly can stand on its own as a fine science fiction book. The author has done a fantastic job of bringing the reader up to speed with this volume, expanding on the story in the previous books in a meaningful manner. The tone is set early on in the book with a grisly scene, and we come to understand that an apocalypse has taken place on Earth between the years of 2019 and 2025. There are vicious attacks, blood taking over the countryside, and demons that need to be eliminated. DNA and genetic engineering are prominent story lines, creating scary new notions of what monsters are, yet the presence of young warriors like Hoot give hope for the future, as the story moves along with an increasingly fast paced plot....
​Solid plot, interesting characters make this a fine science fiction novel. Highly recommend.
— V.E. (4 Stars)

A FANTASY SUPERPOWER SUSPENSE
The story of the earth after the apocalypse has released death and destruction across the globe. The story is gripping and pulls you in and keeps you guessing what will happen next. Follow Hoot, Caru, Proto, and company on an epic journey filled with 6 legged beasts with transparent skin that slays cattle along with anything else that gets in the way. This massive demon haunts Hoot's dreams as well as her days. The story is well written with many good characters to meet along this journey. I like the polar bear pets as well as the eagle. I recommend you grab this one up and dive into a fantastic trip through a fantasy world that Hoot and her demon live and walk the earth.
— Jimmy Ray (4 Stars)

EXCITING, YET CHILLING
As the Skalags and the Ukes continue to feud, Andy Skrzynski completes his third and last book, The New World: Crimson Winter. It has been over ten years since their last fall out and the Skalags are busy making mutated creatures to torture the Ukes. But freakish monsters arrive overwhelming this area with their copper blood, harvesting organs, and disappearing when harmed. Each assume the other is responsible, leaving the reader expecting their next meeting. Andy Skrzynski throws kinks into The New World: Crimson Winter as the Ukes communicate with their technical friends in Texas. Speedy sends them his temperamental AI who bonds with young SKeeter, which I found their tricks humorous. Andralec throws a loop in their beliefs about these creatures, not just how some scientific freak gives an added twist leaving the team struggling to gain knowledge. Meanwhile, the mixed emotions between Zo and Caru are buried but surface in their minds. I love the unique characters and the bizarre creatures. Not knowing what the author will add and the intensity of the battle against the monsters makes this a worthy read for any paranormal lover.
— JoJo Maxson (4 Stars)