"Introduction" to My Childhood Story

Hello, everybody. During a time when many of us were cooped up indoors during the COVID-19 pandemic, reading stories was picking up in popularity. Allow little Andy Junior to share his emotional experiences and historical perspectives from the eyes and heart of a young boy during his stay in an orphanage and the years that followed.

Enthusiasm for his short stories has been growing across many Facebook groups and other media outlets as readers fall in love with the little boy's honest portrayal of the events -- some good, some bad -- that shaped his life at such a young age.

It is my pleasure to share with you several short stories which compile an extensive look at Andy Junior's life during the late 1950s, 1960s, 1970s, and beyond. By reading these true stories from the eyes of a young child, growing to be a young man, you will relive some of the experiences many witnessed several decades ago.

This first story is the INTRODUCTION to Andy Junior's life and the challenges that will be laid out ahead for your reading pleasure. You'll get the chance to enjoy several old pictures of that era and get a glimpse inside the orphanage which housed up to 50 boys at a time. Imagine the excitement and possible shenanigans perpetrated by so many rambunctious lads in the same mansion, operated by a handful of nuns!

Without further adieu, here is the...

Life often offers disruptive challenges disguised as opportunities, or is it the other way around? Sometimes, it’s difficult to tell, especially as a child. Many years can pass before the truth eventually reveals itself.

The adventures upon which you are about to embark are those of a young lad who knew very little of the world around him at a time when his family life abruptly changed forevermore. Born on the bitterly cold night of February 16, 1954 in Jackson, Michigan, Andy Skrzynski, Jr. began his journey under the care of a loving mother and a strict but hard-working father of Polish descent. As the family continued to grow, they lived within the primitive confines of a tiny three-room Quonset home with no indoor plumbing.

At only five years of age, Andy Junior learned his parents were getting divorced, sentencing him and his brother to an unwanted life in an orphanage with 50 boys. His heart and spirit had been shattered. Using an outhouse with frigid wooden seats in the winter and sleeping in one bedroom with the entire family, including Tata, Mama, Little Brother, and Baby Sister was not the most desirable of conditions. Even so, the thought of being dropped off at an orphanage absolutely horrified him.

Being placed in the care of nuns, dressed in white and deep brown habits that made them look more like disgruntled penguins than humans, frightened him worse than any of the witches from the fairy tales he had heard. What could he possibly have done in his short life to deserve being abandoned and having to face a horde of strange boys, who most certainly would taunt and tease him and his little brother?

Discover how this scared, young lad survived his five eye-opening years at the St. Joseph Home for Boys, molding him into the man he would become.
​
*********

That's it for now. You can continue reading by going through the Table of Contents for Andy's Short Stories and select the ones you'd like to read to gain more insights into Andy Junior's life. You will be able to experience the emotions in the same fashion as little Andy perceived them during his most exciting and scary moments.

Thank you for taking a moment to enjoy my story. I love you all!!!
Andy Skrzynski 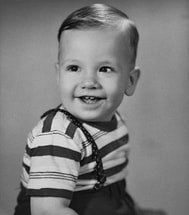 This is the first year birthday
picture of Andy Junior, born
in Jackson, Michigan on a cold
day in February of 1954.
Andy was the first of three
children born of Lula and
​    Andy Skrzynski.

Andy Junior's parents, Lula and
Andy Skrzynski, were dressed up
in the kitchen of their Quonset
home to celebrate their first
marriage anniversary in 1952.
They would later be known as
Mama and Tata (Polish for dad)
​   while raising their children.