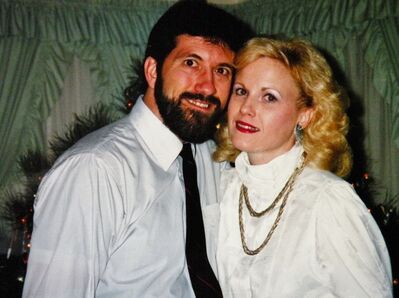 I hope you enjoy more of Andy's life experiences and the lessons that come with them.

Caution: not all people enjoy reading about such creatures mentioned in this writing.
​
"Things That Slither"

"All of God’s creatures are important, but some are not as welcome as others.”
--Andy Skrzynski

As it turned out, Bonnie wasn’t only scared of spiders. There were other things she’d prefer to never inhabit Earth.

After selling the first house that we lived in following our marriage, we moved to a burgeoning neighborhood with all new homes. Our family was one of only a few to move into the Scofield Farms subdivision being developed in north Austin, near the intersection of Braker Lane and Metric Blvd.

There were only a handful homes built up to that point, with more in the construction stage. A few of the new roads had been paved, but there were many more being graded and readied to be black topped.

One evening after dinner, Bonnie and I decided to take a walk and explore the neighborhood, while our daughters worked on their homework. My longtime friend and I loved our times together, conversing about things we didn’t want to discuss in front of the girls or items we just never had time to chat about otherwise.

Of course, by this time in the girls' noisy teenage lives, we also craved the quiet moments during our strolls. It only took a block or so before we’d be yawning to confirm that our relaxation was finally settling in.

Reaching the end of a paved section of the road, I looked at Bonnie. “Wanna do a little exploring?” My buddy-at-heart rarely refused such a tantalizing offer, so off we went, hand-in-hand.

I never told my wife about my orphanage experiences and all the trouble I’d get into on such excursions. Therefore, she hadn’t established any hint of caution with such suggestions. Sharp as a tack, she would likely catch on to my love of shenanigans -- sooner rather than later.

Partway down the graded section, an eerie sensation pricked my senses. Something’s not right. While continually scanning the area ahead as we walked, I suddenly squeezed her palm and held her back.

Apparently startled by my abrupt motion, she stared at me. “What’s wrong?”

I slowly lifted my other arm and pointed straight ahead. “See that?”

Squinting for a moment, she spotted my concern and immediately screeched. Without the slightest hesitation, she released my hand, spun around, and took off in the opposite direction.

By the time I turned to see what my lovely wife was up to, she was gone. I had never seen her run before, but she was racing like a terrified deer, trying to escape a hungry wolf. A few seconds later, she was an oblong dot with a trailing cloud of dust.

A shiver shot up my spine, and I whirled to check on the frightful menace that scared Bonnie out of her wits. Fortunately, it hadn’t moved an inch. It seemed to be basking in what remained of the sun's rays, as the massive orange ball slowly dipped behind a grove of red oaks.

Unsure what to do next, I stared at the deadly creature, encased in its crusty black and brown skin with a distinct pattern to match its name. I sucked a deep breath. What am I going to do with this diamondback?

I stared at the rattlesnake from head to tail. That sure is one big sucker!

Every bit of five feet or more in length, the poisonous viper must have spotted me. It slowly wound its long, thick tube of a body into a coil. The precarious creature's large rattles vibrated vigorously while sounding like a cross between cicadas and nighttime crickets.

With a sigh, I ever so slowly backed away. As much as I wanted to let the thing be, my newly established instincts of a protective daddy tugged at my soul. Can’t leave something this dangerous hanging around these parts.

When it came to a neighborhood with a lot of people, there’s a difference between a good snake and a viper. This slithery thing possessed the potential to kill an unwary victim that wandered too close.

I had seen kids and some of the other grownups exploring this section before. Somebody’s going to get hurt.

I knew all too well how lethal such a creature could be. I had read that such powerful snakes could strike out up to two thirds of its full length.

As I inched closer from a distance, it hissed and struck at me. I leapt back and kept my eyes glued to its flickering tongue. With its wide girth, the nasty beast appeared every bit as muscular as its menacing attitude.

Keeping my distance, I stared into its piercing eyes and softly spoke, as it curled even tighter. The clatter from the large rattles at the end of its tail grew louder.

I shook my head. “You’re in the wrong place at the wrong time, buster. You don’t leave me much choice.”

With a wary eye on the snake, I quickly glanced at the ground to my left. That ought to do the trick.

A minute or so later, after dealing with the venomous demon, I headed back to the house. I couldn’t help but worry that Bonnie might have had a heart attack over the whole ordeal. She never looked that scared before -- except maybe with those tarantulas!

When I arrived, the front door was locked. After I knocked, Bonnie opened the door with a stern expression planted across her face. “Where were you? Why did it take you so long? I was getting ready to call 911.”

I grinned. “It wasn’t that long -- no more than 10 minutes at most. Anyway, I had to take care of that thing.”

“What do you mean take care of it?”

“What do you think? I had to get rid of the sucker. That thing could have bitten somebody -- maybe even a kid. So, I killed it.”

She stared at me with a look of shock. “You’ve got to be kidding? How on Earth did you kill it? That thing was huge. It could have bitten you!”

“Nahhh, it wasn’t really that hard. I found the biggest rock I could lift and heaved it. Luckily, it landed on its head. I made sure it was dead for good by throwing additional big rocks on it for good measure. Then, I dug a hole in the soft dirt to the side and used a long stick to drag it in and cover it up. That thing wasn’t going anywhere by the time I got done with it.”

Little did I know. That particular episode marked the beginning of many more encounters with slithery vipers.
**********

That's it for now.

Thank you for all of your amazing support!