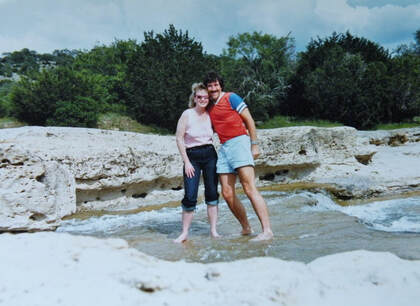 As has been typical, my original "Creepy Crawlers and Things That Slither" rendition grew to be much longer than I expected, so I divided it into two short stories. Enjoy this short story, following the time when Bonnie and I were so thankful for our time together at Cow Creek.

“While most of God’s creatures are beautiful, some are uglier than sin.”
--Andy Skrzynski

After a glorious afternoon of wading in the cool waters of Cow Creek, Bonnie and I returned to the car and continued our scenic drive through the Hill Country along FM 1431. My riding partner referred to the rocky terrain, scattered with thick clumps of cedar trees, as “broccoli mountains,” -- the perfect description for its appearance.

As we traveled along the curvy road, we often caught glimpses of Lake Travis in the distance. We passed Lago Vista then Jonestown and wound our way through the hills, before rounding the last of the sharp bends. Another road I had never tried before appeared on our right.

I slowed as much as I dared around such a deadly curve and turned down this intriguing new path. Maybe this will take us back to the other side of the lake, where we started?

After cautiously traversing some of the sharpest bends I’d driven in a long time, it became clear why nobody ever suggested this route. It wasn’t quite as bad as the sharp turns and sheer cliffs of Oh My God Road in Colorado, but it was dangerous enough. I better slow down. Far too often, I ended up crawling at five mph just to make some of the ridiculous curves.

As we approached one bend, Bonnie shrieked, and I almost crapped my pants. Two crazy motorcyclists leaned into the sharp turn, cutting the corner too sharp as they flew past us. With little time to think, I swerved toward the non-existent shoulder.

Skidding to a stop, I looked at Bonnie. “Did you see those stupid idiots?” Another foot or so, and my Camaro would have ended up with two cedar trees for not-so-fancy hood ornaments.

Her eyes still possessed that terrified look. “Of course, I did! They almost killed us!”

I slowly maneuvered around all of the remaining curves, half expecting more Evel Knievel wannabees to come flying around the corner. It seemed like forever before I finally spotted Lake Travis in the distance once again. The first road I came to, I took a right and headed in the direction of the water.

Off in the distance, near the edge of the road, something caught my eye. About the size of a fist, the strange creature slowly crept across the road. Then another, and one more after that followed the first two.

Not sure whether my eyes were playing tricks or not, I never said a word as we slowly approached. Bonnie was busy trying to spot the lake and hadn’t seen them yet.

I stared harder as the car neared the mysterious creatures. Given the harrowing experience just a few minutes earlier, I probably shouldn’t have come up with such a harebrained idea, but I couldn’t resist.

I ever so cautiously pulled alongside the traveling trio from Bonnie’s side of the car and slowed to a halt. Surprised, she turned toward me. “Why are we stopping in the middle of the road?”

A sly grin escaped me as I replied. “I want you to see something. Go ahead, open your door.”

Not knowing me well enough yet, she simply did as I asked without question. I half expected the creatures to have scooted off into the weeds as I pulled the car so close, but no -- that wasn’t to be.

As Bonnie tentatively opened her door, all three of the 8-legged wanderers, hairier than sin with buggy eyes and long fangs, rose to their hind legs. Either the arachnids were praying to some spider god, or they were in all-out attack mode.

I wasn’t exactly sure which, until the biggest and closest of the frightful creatures suddenly hopped toward the car. Bonnie slammed the door shut and practically jumped in my lap, swinging and cursing at me for some strange reason.

Unable to control my laughter, I attempted to soothe her. “Haven’t you ever seen a tarantula before?”

At that point, she stopped flailing and shot a glare. I’d swear her eyes were as red as the devil’s, when prepared to snatch some forlorn soul.

Suddenly, a heaping dose of worry shot through my veins. Did our relationship just get axed by my stupidity?

I gulped. “Oh, come on. I was just fooling around. They weren’t going to hurt you. I’m sure they were more scared of you than you were of them.”

Of course, I hadn’t a clue what was on the mind of those monster-sized spiders. To be honest, I was just thankful the closest one hadn’t jumped into the car. My goose would have been cooked for sure.

After a lot of sweet talking, I finally calmed Bonnie down and coaxed my lovely friend back into her seat. After settling her down, we proceeded along our trip once again.

My sweetheart still seemed a tad steamed for some apparent reason. Why do women have to get so angry at such innocent pranks?

A while later, I spotted a clearing off the side of the road. I pulled onto the dirt trail, overgrown with tall weeds, and parked the car under the shade of a massive live oak tree -- the kind that kept their leaves through much of the winter.

Given the circumstances, a bit of quality time was certainly overdue, so I consoled my sweetheart for a very long time, before she finally smiled once again. Whew.

I prided myself on softening the angriest of people, but I wasn’t so confident my magic would work on this particular occasion. I’m sure it had a lot to do with Bonnie’s Irish blood, but she resisted my soothing powers longer than any other woman I had attempted to persuade in such a manner.

I’m not quite sure what bad deeds I had performed to deserve my fate, but at that point, my life was blessed with three of the most stubborn people I’ve ever known: Bonnie, her daughter, Shannon, and her father, Joe. My sweetheart wasn’t quite as stubborn as her dad, but it was nose-to-nose at the wire with those two.

Fortunately for me, my strong-willed partner finally succumbed, and her eventual smiles morphed into some heated kissing and heavy panting. Before I knew it, we were engulfed in a flurry of serious exercises, unsuitable for the eyes of children.

If there was one thing about my Irish heartthrob, she never left me wishing for more. When it was all said and done, I could not imagine being happier, and I was very thankful for this short time together -- without the kids.
**************
​
That's it for now! I hope you enjoyed my story.