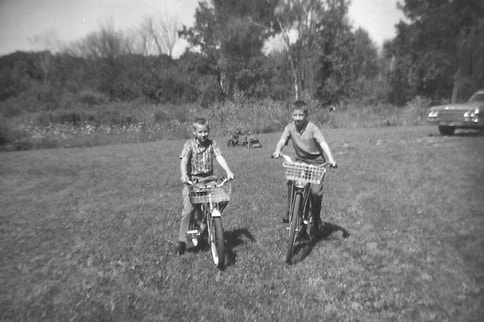 This picture was captured during the summer of 1963, on one of our weekends off, while my brother (on the left in the picture) and I still lived in the orphanage. After adding large saddle baskets, I used this same bike for my paper route a few years later. My brother received a new, larger bike like mine for Christmas, before he joined me on the paper route a year later.
The 13th Short Story
Seven Miles of Paper -- Part 2
"Seven Miles of Paper -- Part 2"
ANDY JUNIOR'S CHILDHOOD STORIES
Life After the St. Joseph Home for Boys
My 13th Short Story

When my dad remarried in 1965, he brought us three kids back to live at home on Sandstone Road in Spring Arbor, Michigan. I kicked off another new schoolyear that September at Western Junior High School in Parma, Michigan. My brother and sister went to elementary school in Woodville.

“Delivering newspapers can be dangerous to your health.”
--Andy Skrzynski

For the most part, conducting a paper route was a rather mundane experience, unless you figured a way to spice things up a bit. My brain was always churning to add a little excitement into our rather laborious but often boring existence.

The next summer, Archie was old enough to deliver papers, so I split the route in two. Giving half to my brother allowed us to complete the task twice as fast. What a difference having a helper makes!

Such a partnership also proved to be much more interesting, during the first week. We chatted about things we rarely had time to talk about, while throwing in a zinger or two and laughing at each other’s stupid jokes.

Occasionally, I caught my brother off guard and coerced him into singing along with me, as I practiced songs for the school’s choir. He reluctantly succumbed to such torture only when we were well out of hearing range of anybody else.

Like most teenage boys full of energy, we regularly challenged each other to races with our bulky bikes. With knobby tires, more suitable for endurance than speed, we weren’t exactly riding the swiftest of chariots.

To compensate for our Huffy bicycles, ladened with oversized baskets, we’d have to stand up and pump our legs as hard as we could just to pick up the slightest bit of speed. Our bikes would lean from one side to the other, as we feverishly bore down on our pedals and tried to outdo one another.

Such swaying of our bikes on the loose gravel of Sandstone Road made things all the more perilous. Frequently, our back tires spun and slid across the loose pebbles, forcing us to slow down or risk wiping out altogether.

Sitting on our saddle seats in the middle of a hard-fought race would often earn the dreaded moniker neither of us wanted to hear. Being called a sissy was as welcome as skinning a knee or spraining an ankle. They all hurt, one way or another, so we avoided them at all costs.

Nonetheless, we never allowed such challenges to squash our enthusiasm for a little thrill along our route. Besides, this was about the only chance for any form of excitement during the day. We couldn't possibly let boredom dampen our trips.

One fine day, after showing Archie the ropes about collecting money, I was feeling a bit energetic. I stared at the driveway of the house we just visited.

The black-topped surface stretched about an eighth of a mile -- perfect for racing. Best of all, it had been recently paved and smooth as could be -- way better than that rough gravel and hazardous potholes on Sandstone!

As we mounted our bikes, I looked at Archie. “Wanna race to the end of this driveway?”

My legs pumped as fast as I could push them, while my bike picked up speed. The weight of the newspapers in all three baskets made things all that more difficult.

Both of us recklessly swerved like a couple of drunken sailors. Halfway down the driveway, we veered too close, and Archie’s right pedal caught the spindles of my front wheel.

My bike came to a screeching halt, and I flew over the handlebars. “Crap!” The actual word I yelled as I hurtled through midair was nothing quite so polite.

Trying to keep from busting my chin wide open, I extended my arms to break the fall, while my hands and knees slid across the pavement. I screamed, “Ahhh, I’m hurt!” Unharmed, Archie’s bike slowed to a stop.

A searing pain shot from my knees and fingers. I stared at the blood, steadily flowing from two of my knuckles where the skin had been scraped to the bone. As much as I tried, I couldn’t stop the bleeding.

I looked at my brother. “I’ve got to go back to that house and see if they’ve got some bandages.” Glancing at the mangled spindles and flat tire of my bike’s front wheel, I sighed. “I’m in big trouble. I can’t use this thing for the rest of the route.”

We never spoke a word to our parents about what really happened, because we knew we’d get a whooping for sure. I made up some crazy story about loose gravel causing me to slide and ending up in the ditch.

Figuring this was one of those venial sins, I decided to simply spend a little more time explaining things in the confessional during my next trip to church. Lord, I hope you understand.

Stitches would have been best, but I already felt stupid enough and didn’t want to go to doc’s place. I just washed my knuckles, poured peroxide over them, and double wrapped the damaged fingers with the widest band-aids I could find.

I dutifully changed the dressings every evening until they finally healed. It took several weeks for the tissue to finally grow back over both wounds, and to this day, the two knuckles on my right hand have bulging calluses from the scars.

The pain from my throbbing scrapes was bad enough but shelling out the money to fix my bike from my meager share of collections hurt almost as much. By the time I bought paint and new parts to replace the damaged tires, wheels, and front basket, my war chest took a mighty big hit.

Only a couple of dollar bills and some loose change remained at the bottom of my tattered cigar box. Closing both eyes, I shook my head. You’ve got to be kidding! The wonderful opportunity of making my own money for the first time wasn’t looking nearly as promising as it once did.
********
​
That's it for now. I hope you enjoyed the first and second parts of my story as a paper boy.